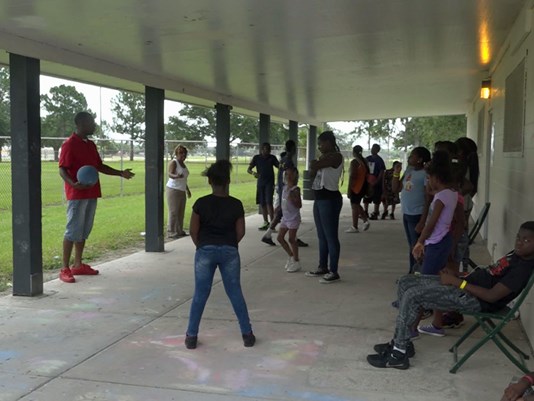 “IV Patterson, or Coach, as the kids call him, had fun trying to keep up.

But, more importantly, he’s happy kids in a neighborhood near the Fairgrounds have a safe place to play this summer.

“It gives kids an outlet to make better decisions.”

A group of Hillsborough County leaders kicked off a new summer program in a facility that was forgotten and unused.

“When we found out there were about 200 kids within a two-mile radius of this area, we wanted to make sure they had somewhere to go,” said Freddy Barton.

Barton is with Safe & Sound Hillsborough, which helped fund the renovation of Kings Forest Park, giving it a refurbished playground, more lighting, and an upgraded facility.

“We wanted to make sure that we grab those kids who would otherwise be lost in the cracks,” Barton said.

Just this week, the lives of three families were changed. Tampa Police arrested an 18-year-old for shooting at two other teens, injuring one and killing the other who was just 17.

Reducing crime in the community is no easy task. But, many believe giving kids supervised and structured activity helps.

“Any time that we lose a kid to the streets or the criminal justice system or, worse yet, is killed on the streets, you know it’s a tragedy,” said Hillsborough County Commissioner Kevin Beckner.

Beckner hopes building up the community helps knock down incidents of violence.

“I believe it’s our role as government to provide that opportunity.”

Safe and Sound Hillsborough is working on a similar project in Plant City and the program gives out neighborhood zone grants for communities with their own ideas.”